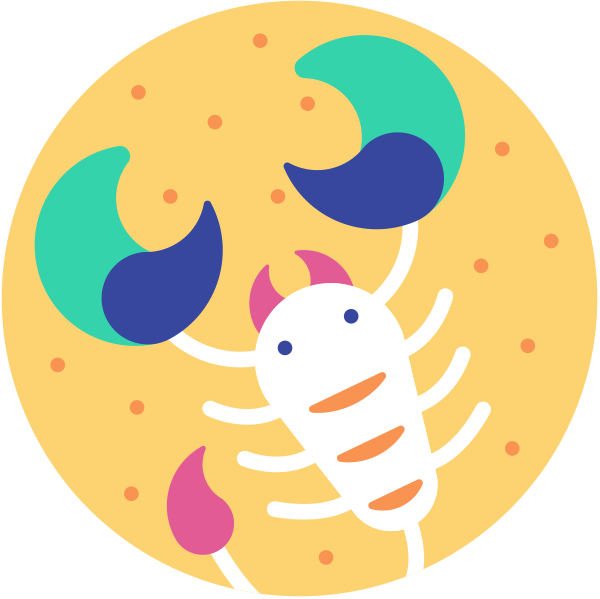 Ruled by fiery Mars and destructive Pluto, a Scorpio in love has one mode for relationships—and that's full-on. Scorpio loves romance and passion, including up-all-night fights. Scorpio never does anything halfway, and believes that true love comes with true fights.

Flirtatious, seductive, and mysterious, Scorpio loves playing hard to get initially, and may look like they never take the lead. This isn't true, though. Scorpio can pull the strings, relying on body language and subconscious cues to make their potential partner do exactly what they want them to do. Scorpio loves the chase, and loves the drama and pageantry that comes with initial dates. They love going all out with outfits, reservations, and candles and truly want to be the best date you've ever had.

While Scorpio may seem like they're well-versed in love, and they love seduction, they can be cautious when it comes to settling into an LTR. That's because water sign Scorpio hides a lot of emotion underneath their surface, and when they open up to a significant other, they want it to be for life. When a Scorpio does let their guard down, it's a big deal, and a sign they truly want the relationship to last.

Cancer: Passionate and in tune with their emotions, Cancer and Scorpio can have an almost psychic connection, and Cancer's innate understanding of Scorpio can help avoid any hurt feelings. For them, there are no words needed to describe their feelings for each other—which may be a good thing since verbal communication is not always the most comfortable for two water signs.

These are two people who fundamentally, intrinsically, and instinctively just "get" each other.

Aquarius: These are both signs who are used to marching to the beat of their own drummer. Cool Sagittarius can provide the pragmatism that Scorpio needs to diffuse some of their intense emotions. They make an odd match, with airy Aquarius valuing logic and sociability and Scorpio preferring quiet nights at home or with a small group of close friends. Often, Aquarius will feel limited by Scorpio, while Scorpio feels pushed in directions they aren't comfortable going.

Taurus:Between Taurus and Scorpio, it's true that opposites attract. Grounded earth sign Taurus may initially seem too staid for intense Scorpio, but this match can last precisely because Taurus won't get drawn into any drama. Due to both valuing their privacy, many of their friends and family might not learn about the relationship for years—if at all. They love in secret, but they love deeply. As fixed signs, they are dependable and stable. But watch out: jealousy, obsession, and stubbornness could blow out this flame.

Bring on the reservations, the candles, and the dimly lit cocktail bars, because Scorpio adores the glamour and intrigue that comes with first dates. To Scorpio wining and dining is an art, and they adore bringing their dates to places that make them feel like they've stumbled into an exotic country. To Scorpio, dating is all about letting go of the every day and getting lost in fantasy.

The Deal with Scorpio and Fire Signs

It's common for water sign Scorpio to become downright obsessed with fire signs—the sign they aren't supposed to go for. So why theÂ attraction, and can it ever work?

Fire signs (Aries, Leo, Sagittarius) speak to Scorpio's intense passion. But while fire signs are all intense energy, Scorpio has a well of emotion underneath—when Scorpio gets mad, they stay mad, unlike fire signs who can get over it seconds later. Scorpio and fire signs both seem similar on the surface, but often have trouble speaking each other's language—fire signs communicate in actions, while Scorpio is all about emotion. The result? Tons of mixed messages, followed by a fiery breakup, maybe a temporary reunion, and an even more intense final goodbye.

But it can work! The trick is that each partner has to stop thinking their way is the "right" way, and stop trying to change their partner. Scorpio needs to step back and let some things roll off their back, and come up with coping mechanisms that don't involve the silent treatment. Fire signs need to learn that emotions are real, even if you can't see them. And together, these signs can create some serious sparks.

How to Seduce a Scorpio

If you have your eye on a Scorpio, be ready to be rejected at least once. It's not you, it's their sign. Deep down, strong Scorpio may have rejection fears of their own, and trying rejection on you is one way to make sure you're serious about them. Here, how to make sure a Scorpio knows you truly want them and get them to fall for you.

Be funny. Scorpio loves independent thinkers, and a sarcastic quip or comment will go a long way in their book. The less you worry about looking "cool," the better.

Have your own life. Scorpio is not interested in a codependent relationship and shies away from someone who seems like they "need" a romance to seem complete. Having a full life of friends, family, and hobbies makes it clear you want them in your life.

Own your intelligence. Scorpio has a soft spot for smarts, and loves when someone they like shows just how intelligent they are. Read the news, talk about books you've recently read, and strive to learn at least one new thing every day. It will drive a Scorpio wild.

How to Make Love to a Scorpio

Scorpio is known for being one of the most intensely sexual signs of the Zodiac, but don't assume that means Scorpio is sex starved. For Scorpio, sex is to be savored, and they truly appreciate a partner who takes their time, learns what they like, and focuses on all senses to bring Scorpio to the next level of pleasure.

Scorpio loves foreplay, which often begins during date night. A sidelong glance, whisper, or gentle caress speaks volumes. Make sure to worship a Scorpio's body by touching it, complimenting it, and truly learning how it works and what pleases them, and they will return the favor.

If You Love a Scorpio Woman

Realize you will never truly know her. Scorpio women are mysterious, and it takes a lifetime for her to even understand herself. The worst thing you can do is try to pretend you know her better than she knows herself—it's not true, and the statement will make her resent you. Give her space, let her breathe, and make it clear that no matter what happens, you're her partner through the good and the bad, and you want to be by her side no matter what.

How to Communicate with a Scorpio Woman

Talk through the hard stuff. Scorpio's intuition is finely tuned, so when something's off in the relationship, she knows it. Pretending everything's fine when you're having problems will only drive a wedge between you both. You may feel like you're dwelling on negativity, but practical Scorpio believes talking through things and being direct and pragmatic is key to a long and happy life together. Sweep things under the rug, and you'll soon find yourself seeking the door.

If You Love a Scorpio Man

A Scorpio man may seem brusque and abrupt, and it may seem like he doesn't care about you. Not true. Scorpio men care deeply about their partners, but also care deeply and are fiercely protective of themselves, and may be setting up barriers to avoid getting hurt. The best thing you can do is be direct and tell him how you feel. He takes honesty—even if it's about something that you're upset about or something that's not going great—as a compliment, and would much prefer you tell him about an issue than pretend everything's fine.

How to Communicate with a Scorpio Man

Put all your cards on the table. For a Scorpio man, passive-aggressive actions like the silent treatment (even though he's been known to play it himself) make it seem like you don't care about him. Making it clear that you're sharing everything on your mind and in your heart, even if you don't 100% know what you think, shows him that you're all in.

Should You Marry a Scorpio?

Yes! Loyal, passionate, and funny as hell, a Scorpio is one of a kind. You'll never laugh harder, fight harder, or be more in love than you are with a Scorpio. Is life intense? Yes. But you'll soon realize you wouldn't want it any other way.

3 Signs That Scorpio is Playing for Keeps

Scorpio may seem aloof and uncaring, but these three subtle signs show they want you in their life—and may just be ready to come out of their shell.

Let's get one thing straight: Scorpio cares a lot. So when they talk through a relationship issue for hours on end (which they will, even for minor stuff like the way you leave the toilet paper roll) it's a sign they care. When they don't talk or walk away from a fight? It's a sign they're just not invested.

Another red flag? When Scorpio fails to keep your feeling in account. Scorpio is incredibly in tune with emotions, so if they find themselves not checking in with you, saying something hurtful without apologizing, or seeming callous about how you may be feeling, it's a big sign that Scorpio is on their way out.

How Scorpio Deals with a Broken Heart

Deep down, Scorpio loves the cleansing feeling that comes with totally feeling the agony of a broken heart. Of course, Scorpio would rather not deal with a break up in the first place, but when they face one, they do it right. They cry, they play sad music, they allow themselves to wallow in bed—they feel all the feelings.

And then, they get over it, and may be out flirting with other people, seeming fine the next week. Scorpio knows it takes a long time for their heart to truly mend, but their motto when it comes to breakups is feel the feelings ... then fake it until you make it.